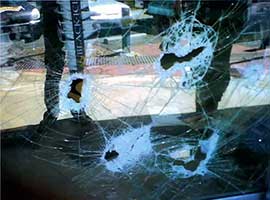 A thief trying to break into the Golden Beach Pharmacy on the Sunshine Coast in November 2008, could not smash the shop front glass to gain entry because of the safety film fitted to the window.

Pharmacies are a prime target for smash and grab thieves wanting to steal prescription drugs and money and owners of pharmacies and other retail outlets are taking precautions against after-hours theft by bolstering security.

New, inexpensive measures like safety film,are available and it does not entail hi-tech alarm systems or round-the-clock security guards.

The thief damaged the glass by hitting it repeatedly with a metal bar. While small holes were made, the shattered pieces of glass were held together thanks to the security film that had been applied years before.

This meant there was no way the frustrated burglar could enter the store.

A steel bar was found inside the pharmacy, indicating the thief used so much force while bashing the glass they lost control of it through a puncture hole.

An impression of a boot or shoe in the glass suggested the thief may have kicked the window in one final attempt before running away empty handed.